Abstract：Recently, Huntsman announced on its official website that the company has a long court battle with Praxair/Linder, one of the industrial gas suppliers to Huntsman's Geismar MDI production site in Louisiana, a New Orleans The jury awarded Praxair to Huntsman about $93.878 million.

Recently, Huntsman announced on its official website that the company has a long court battle with Praxair/Linder, one of the industrial gas suppliers to Huntsman's Geismar MDI production site in Louisiana, a New Orleans The jury awarded Praxair to Huntsman about $93.878 million. 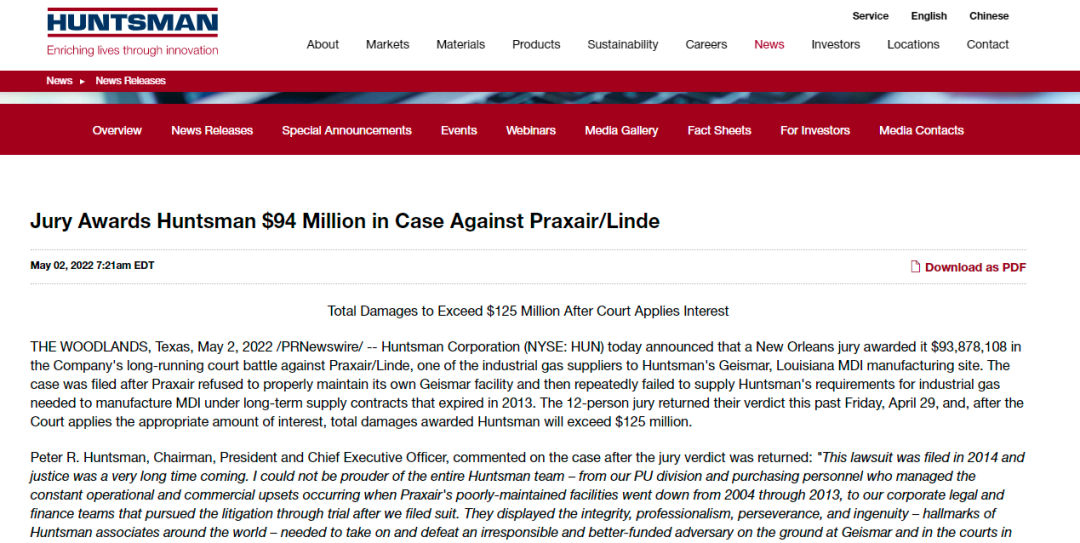 The case is understood to have expired in 2013 after Praxair refused to properly maintain Huntsman's facilities at its Geismar plant and repeatedly failed to supply Huntsman with the industrial gases needed to produce MDI. of long-term supply contracts.

On April 29, a 12-member jury ruled that, after the court added a corresponding amount of interest, Huntsman's total damages would exceed $125 million.

Huntsman Chairman, President and CEO Peter R. Huntsman commented on the case after the jury verdict: "This lawsuit was brought in 2014 and the trial was a very long one. The Huntsman team is proud – from our Polyurethanes division and purchasing staff, who managed Praxair/Linder’s poorly maintained facilities and ongoing operational and commercial issues that occurred from 2004 to 2013; to our 's corporate legal and finance teams, who have stuck with us after we filed the lawsuit.

They demonstrated integrity, professionalism, perseverance and ingenuity -- hallmarks of Huntsman employees worldwide -- to defeat irresponsible and well-funded opponents on the field in Geismar and in the courts of New Orleans. I want to recognize all of them and thank the 12 members of the jury and the trial judge for their time and commitment to fairness in court.

Peter R. Huntsman continued: "After winning a more than $600 million lawsuit against Albemarle last October, this jury verdict will be Huntsman's second significant damages award in the past seven months. Ruling. Our General Counsel David Stryker led both efforts and assembled an incredible team of internal and external lawyers to ensure that any legal disputes against the company were resolved. My management team and I Very happy to testify in both cases, and I will be happy to testify whenever necessary in the future to ensure our shareholders receive the full value of their holdings."

The lawsuit against Praxair was originally filed in 2014, but due to the epidemic and other reasons, it did not go to trial until April this year. After a three-week trial, the 12-member jury reached its verdict in less than three hours, unanimously finding that Praxair had repeatedly violated its commitments to Huntsman, violations that directly cost Huntsman enormous economic losses.

The Huntsman Group is a publicly traded multinational corporation focused on the production and sale of fine and specialty chemicals. It has four business divisions, namely Polyurethane Division, Advanced Materials Division, Textile Dyeing Division and Functional Products Division. Globally, Huntsman has nearly 1.4 million tonnes/year of MDI capacity. In 2021, the group will achieve revenue of approximately US$8 billion.

Praxair was established in the United States in 1907, mainly engaged in gas business such as industrial gas, medical gas, specialty gas and gas engineering services, as well as surface treatment business such as coating. In October 2018, Praxair and the German industrial gas giant Linde Group jointly announced the successful completion of the business combination, which will replace Air Liquide of France and become the global leader in the industrial gas field.